Street art and soccer merge in DOES’ latest work! DOES designed an anniversary shirt for the professional soccer club Fortuna Sittard celebrating its 50th anniversary.

After the launch, Pre order sold out within 5 hours! 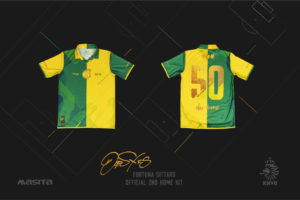 When it all comes together. When the pieces fit like letterforms on a mural and soccer on a green grass field. When the past and present become one and passion equals profession. When art transforms into fluent lines to embellish a shirt. That is when life becomes meaningful to its fullest extent and when DOES is overcome by pure joy, gratitude and humbleness.

Holland has a huge soccer tradition. Soccer binds people; it’s what you look forward to throughout the week and enjoy on the weekend. The professional soccer club Fortuna Sittard played an important role in DOES´ life. From watching games with his dad as a little boy to wearing the green-yellow shirt of the team himself while playing in the highest division. Although his soccer career is part of the past DOES´ passion and love for the club has never faded. When preparing a list of influential companies to potentially collaborate with, Fortuna topped the list undisputed. Opportunity entered the game as the soccer club celebrates its 50th anniversary this year. Putting heads together Fortuna Sittard and DOES came up with the idea of an exclusive anniversary shirt designed by DOES. This is not an assignment that DOES takes lightly. It’s all about putting care into details. 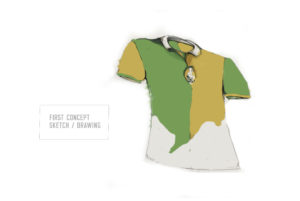 DOES designed a shirt that is both a homage to the club and a piece of art from his heart. As a sketch embodies the basis of an artwork that grows into a display of technique and composition, the training of young talent is the foundation for a successful soccer team. Fortuna has been well known for its solid training programme that develops talented players into first class professional players. The design of the shirt with its liquid lines in the bottom reflects the roots and foundation of the club. 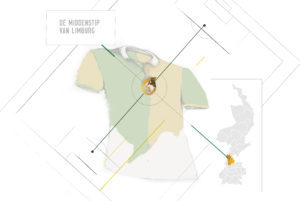 DOES placed the logo of the club in the centre of the shirt to represent Fortuna’s position as the very centre spot of the region Limburg. And while lines from the shoulders to the lower design symbolize the playing field, golden details complete the design as a festal nod to the jubilee of the club. 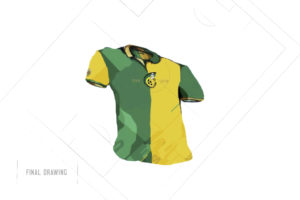 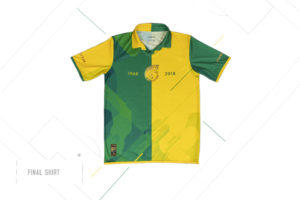 Fortuna’s story reads like a thriller as relegation, persistence, farewells, hope and intrigues play a role. Like the plot in every novel, the club has its own happy ending. For now that is. Coincidence doesn’t exist and while the club celebrates its jubilee, it is once more promoted to the highest division. For DOES to design ´his´ shirt for ´his´ club is what completes the circle.

With massive thanks to Isitan Gün and Masita Sportswear!